Friday, Feb. 25, 2022, President Joe Biden announced that he will nominate D.C. Circuit Court Judge Ketanji Brown Jackson to the U.S. Supreme Court. Being the first public defender to be nominated to the Court, Judge Jackson’s nomination is breathing life into the Court at a level that hasn’t been seen since the 1991 departure of Thurgood Marshall. Her background, which encompasses a near nine-year tenure on the federal bench, provided her with experience on cases that addressed a diverse set of issues, including environmental issues, and provisions of the Americans with Disabilities Act.  Her best-known ruling is Judiciary v. McGahn, where she upheld fundamental principles of executive branch accountability to the legislature when the Trump administration and House Judiciary Committee had been very active regarding Russian collusion with the 2016 Trump campaign. 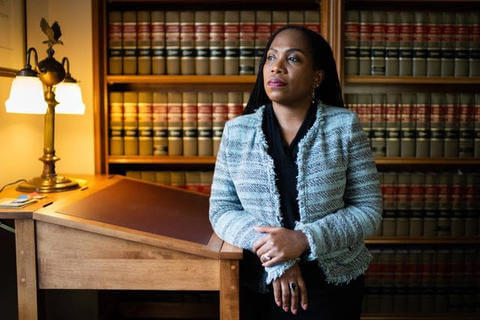 The nomination of Judge Ketanji Brown Jackson is another chapter of the tradition of excellence demonstrated by Black women in American law. Constance Baker Motley’s contribution of being the first to argue in front of the Supreme Court and to be nominated to the federal judiciary should also be remembered today. Also, we remember Pauli Murray’s indomitable will that persevered in spite of discrimination against both her gender identity and orientation that denied Pauli Murray full recognition within the U.S. legal establishment. Currently, approximately two percent of candidates nominated to the federal bench have been Black women; Judge Jackson’s nomination to the Highest Court speaks volumes and may hopefully set a precedent of recognition for subsequent appointments.

The Thurgood Marshall Center is sending firm and proud support of Judge Jackson’s nomination. The Center believes that she will be a necessary and substantial contribution to the Supreme Court. The Center’s faith is that Judge Jackson will continue the tradition of challenging the American legal system to address previous and current injustices in order to create a brighter future for us all. Congratulations Judge Kentanji Brown Jackson once again from the Thurgood Marshall Center!